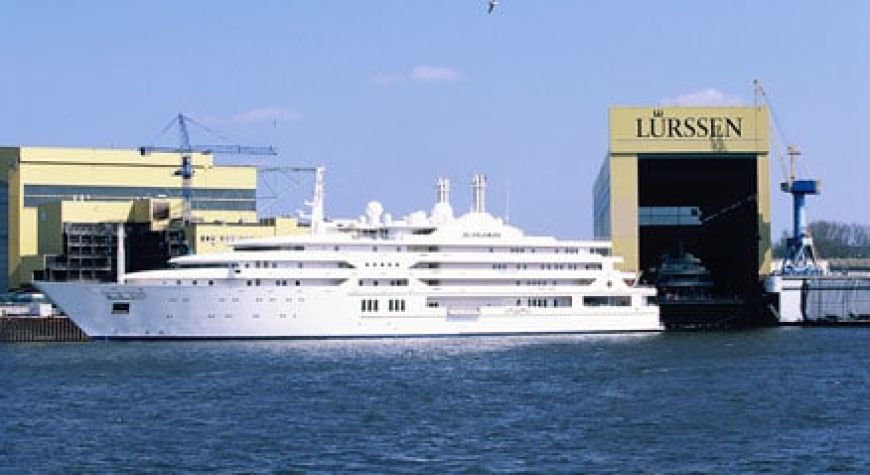 The luxurious yacht Al Salamah has always been intended for royalty. First built for the former Crown Prince of Saudi Arabia, Sultan bin Abdul-Aziz Saud, the Al Salamah was then given to the Crown Prince of Bahrain Prince Salman bin Haman bin Isa Al Khalifa. The Al Salamah is 457 feet in length and can achieve a top speed of 22 knots.

Named Mipos (Mission Possible) during its project phase, the Al Salamah’s construction started in 1998 at HDW, a German ship construction company located in Kiel. Construction was completed at Lürssen shipyard located in Bremen and Al Salamah became the world’s third largest motor yacht when it was launched in 1999. In 2013 the yacht was advertised for sale for an asking price of US$280,000. It was not sold, but ownership was transferred to Prince Salman bin Haman Isa Al Khalifa who received the Al Salamah as a gift.

The Al Salamah’s majestic interior features cream and gold furnishings and fittings throughout that highlight the warmth of the teak deck. In typical Terence Disdale style, the yacht is understated and elegant. Focus is placed on creating an intimate and luxurious atmosphere with down-lights and lamps. Guests can experience the ocean with el fresco dining or enjoy one of the luxuriously appointed dining areas inside. The Al Salamah has 22 spacious suites that can comfortably accommodate up 40 guests whose every need is seen to with an unprecedented complement of staff. As many as 94 crew members with an additional service staff of 56 brings the crew to a total of 150.

Some of the many special features of the Al Salamah include a car garage, a fully equipped hair dressing salon, a cinema, a helicopter pad, several Jacuzzis, a fully equipped gym, a bakery and a dedicated dressing room for artists. The yacht also has three hospital areas, one for the owner, one for crew members and one for guests. The car garage can accommodate vehicles and the secretary office sees to all administrative needs. Five galleys, eight decks, a large pool on the upper deck, and an indoor swimming pool with a glass roof provide ample space for ultimate relaxation.

His Royal Highness the Prince of Bahrain

Prince Salman bin Hamad bin Isa Al Khalifa is the Crown Prince of Barain. He was born in 1969 and is not only deputy King, but also deputy Supreme Commander of Bahrain Defence Force. Prince Salman is the first-born son of King Hamad bin Isa Al Khalifa and Princess Sabka bint Ebrahim Al Khalifa, King Hamad’s first wife. After completing his high school education Prince Salman enrolled at the American University in Washington DC where he achieved a bachelor’s degree in political science. He furthered his education at the University of Cambridge in England where he studied history and philosophy. Prince Salman is known for his International Scholarship Programme through which he is awarding students from Bahrain the opportunity to study abroad.